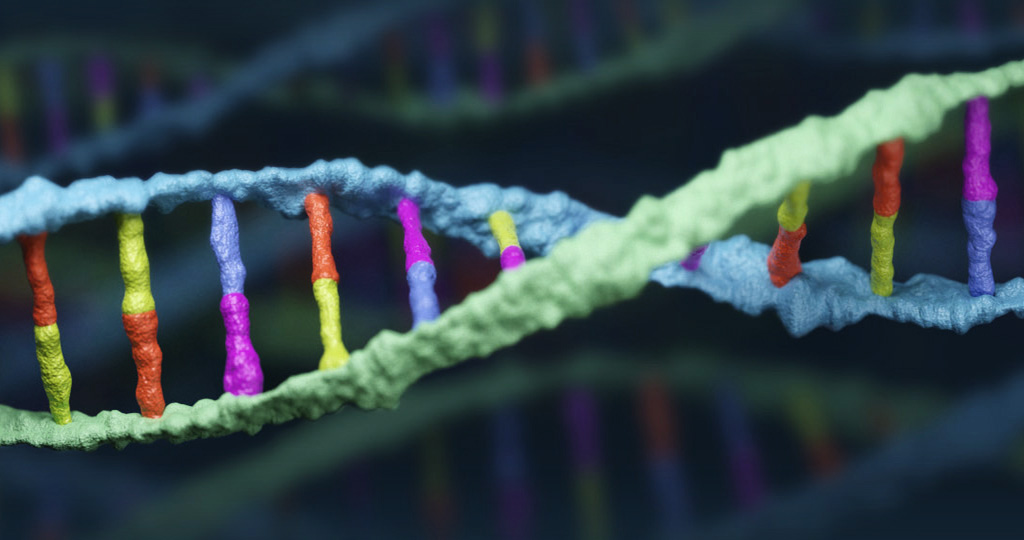 A Genetic Algorithm in C++
to solve complex
Optimization Problems


The algorithm will be explained by finding a solution for a
Travelling Salesman Problem.

Very interesting and complex real world problems can be described by objective functions. An optimization algorithm can be used to automatically find good or optimal solutions for such problems.

An example: Transport companies have to find the most efficient routes for their truck drivers. In such a case an objective function calculates the length of a route and its input is an ordered set of route locations. The goal is to find a solution / combination of locations which will result in the shortest possible route length.

Figure 1 (click to enlarge)
A search space is not restricted to one or two dimensions (input variables).
Optimization algorithms may be used to search for solutions in thousands or millions of dimensions.

A Genetic Algorithm is one of many optimization algorithms. Its purpose is to guide a search process to find a global optimal solution for a problem in a very large search space. It belongs to the class of evolutionary algorithms and can solve very complex combinatorial problems. Evolutionary algorithms are more or less based on biological processes and Darwinian evolution theory. Charles Darwin formulated the scientific theory of evolution by natural selection in his book 'On the Origin of Species', which was published in 1859. The algorithm is not an exact simulation of evolution, but it uses ideas from Genetics like Genes, DNA, Chromosomes, Selection, Recombination and Mutation as an analogy for the optimization of a given problem.

On some classes of problems a Genetic Algorithm can not guarantee to find a global optimal solution, but it may approximate a sufficiently good solution in a relative short time. It is a Metaheuristic which trades optimality for speed and is often the only viable option, when the search space is very large, discrete or not differentiable and therefore not suited for classic mathematical (calculus based) optimization methods.

One example is the automatic design of antennas for radio communication. There is an infinite amount of possible shapes for antennas. An evolutionary algorithm can be used to find the (near-)optimal shape of an antenna with a given requirement. In fact the NASA used Genetic Algorithms to evolve an antenna design for its Space Technology 5 (ST5) mission which launched in March 2006.

There is a huge list of interesting applications for Genetic Algorithms, ranging from the design and engineering of industrial products, solving complex scheduling problems, evolving or training neural networks for artificial intelligence, computational chemistry, stock market trading and financial mathematics, to the automatic creation of art.


Evolution in a nutshell

Living organisms are composed of many different types of cells. The core of a cell is the nucleus. It contains genetic material in the form of chromosomes, which are the blueprints or construction plans of organisms. A chromosome is a DNA (DeoxyriboNucleic Acid) molecule which is a long sequence of nucleotides. The nucleotides are paired together as two long strands. A gene is a small segment of this nucleotide sequence with a specific function. The DNA is a combination of many genes which encode different characteristics of an organism, for example its size, colour and gender.

Just remember that a DNA / chromosome stores information in the form of many genes. The type and order of the genes define the features of an organism.

Figure 2 (click to enlarge).
A simplified 3D rendering of a short DNA-segment (paired strands of nucleotides).

A population is a group of organisms, in which pairs of members can breed offspring (children). The different organisms compete to survive and reproduce. Their children form the next generation of the population. When two organisms reproduce, their individual chromosomes / DNA will be copied, mixed up and passed on to their children (Recombination / Crossover). Furthermore a few genes of the children will be changed by random chance (Mutation).

By inheriting different features of its parents through recombination and the development of new traits caused by mutation, a child will introduce lots of variety into the next generation. The children with the best fitness will survive and reproduce more than other children (Natural Selection). Finally a species will evolve over many generations which is optimized to survive in a specific environment. Fitness does not simply mean strength or intelligence. Organisms with a better fitness have characteristics, which lead to better reproductive success in their environment. Some traits of an organism can be a benefit in one environment and a disadvantage in another one. Successful features for survival will eventually get common in a population, but the diversity of the organisms is what drives the evolution. Without recombination and mutation, which also introduces bad chracteristics into a population, the evolution will stop.

How can evolution be used to optimize or solve many real world problems?

When a problem can be represented as a combination (DNA) of multiple things (Genes) and a function can be provided which calculates the quality of such combination (Fitness Function), a Genetic Algorithm may hopefully find the best of all possible combinations - if given enough time! The algorithm may automatically evolve better solutions from generation to generation with the help of Selection, Recombination and Mutation.

Even a single number, which might be used as an input variable for an objective function, can be represented as a DNA with a fixed number of genes. Decimal numbers and many other things can be encoded as bit strings: 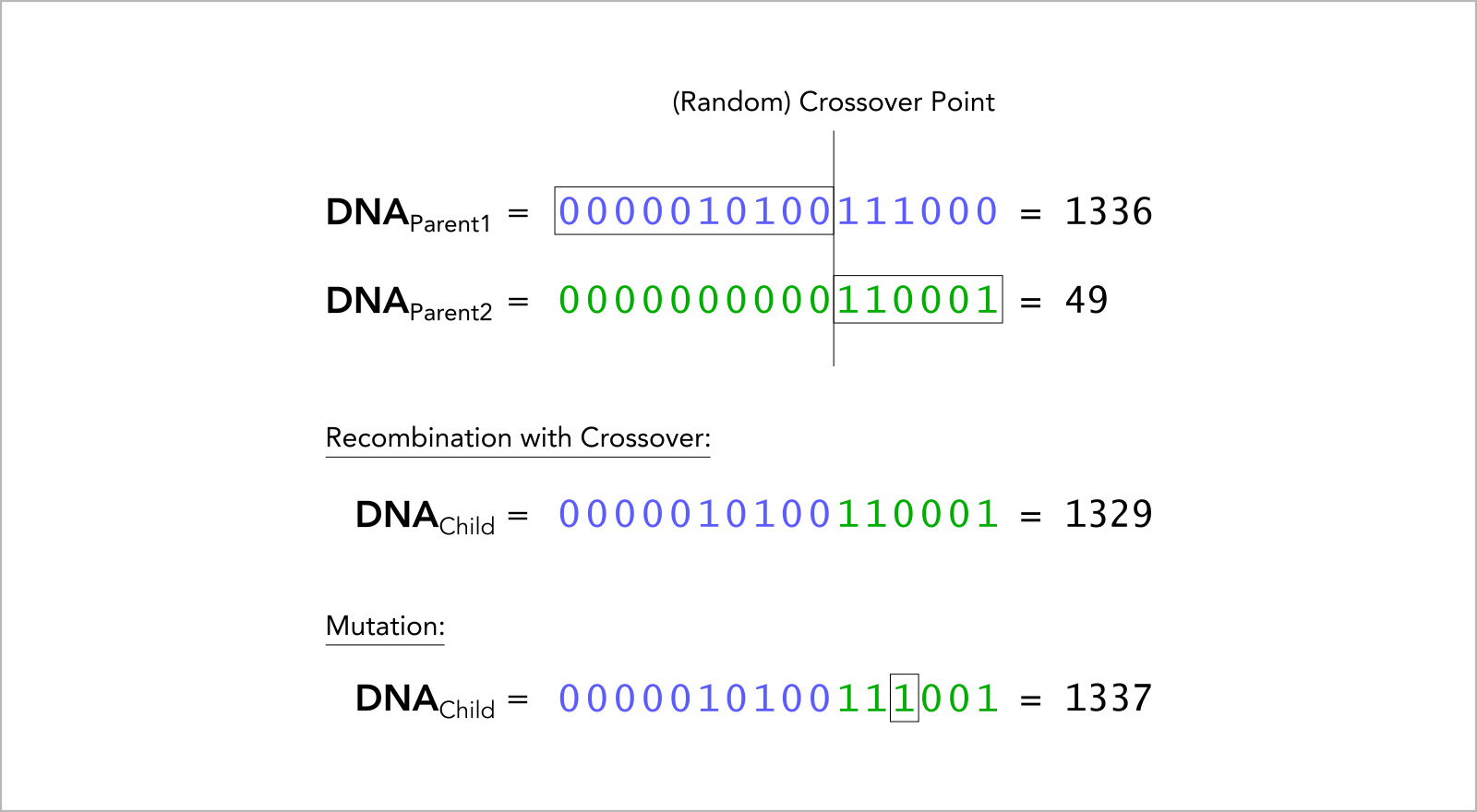 Figure 3 (click to enlarge)
The decimal numbers change when recombination or mutation will be applied to its bit patterns.

Imagine a company has created a new version of its bestselling product. The company sends a salesman on a road show. He should visit the biggest cities in the country to demonstrate the new product to the public. The salesman should travel to each city only once and his journey has to end where he originally started. What is the shortest possible route to visit each city exactly once and return to the origin?

There are very effective and specialized algorithms for solving the Travelling Salesman Problem, like the '2-opt' and '3-opt' heuristic or the 'Lin-Kernighan' heuristic. These local search algorithms reorder route locations, until a shorter route is found. They can be used exclusively or can be guided by Genetic Algorithms and other Metaheuristics to find short routes even faster.

... in the context of the Travelling Salesman Problem:

A Genetic Algorithm is a versatile problem solver, but it is a challenge to find the best values for the initial population size, mutation rate and the best selection and recombination strategy. Too much and too low genetic variation will lead to a break down of the evolution and the process gets stuck in local optimal solutions. The right parameters can also be found by using an optimization algorithm. This is called Meta-Optimization. A Metaheuristic like a Genetic Algorithm can also be combined with a specialized Heuristic (2-opt local search for example) to become even more effective.


An optimization of a Travelling Salesman Problem with a sole Genetic Algorithm. A near-optimal solution for 256 route locations was found after 300 generations. There are still some overlaps in the route. 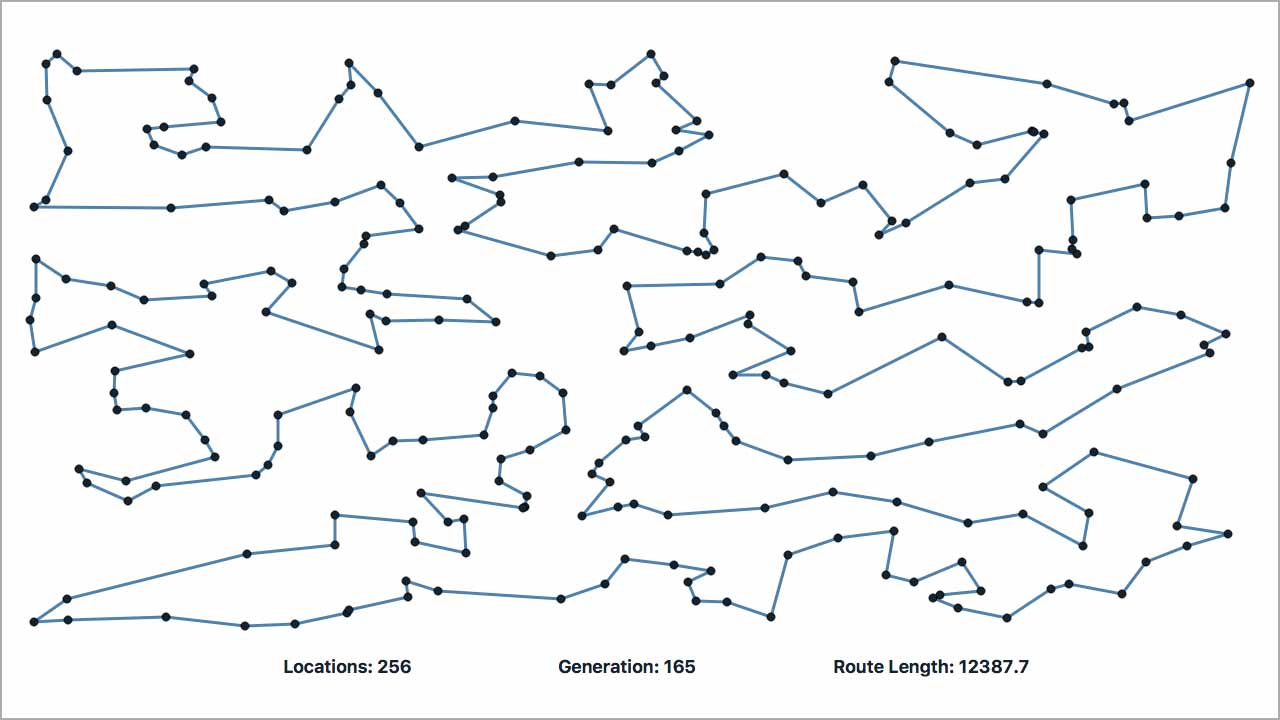 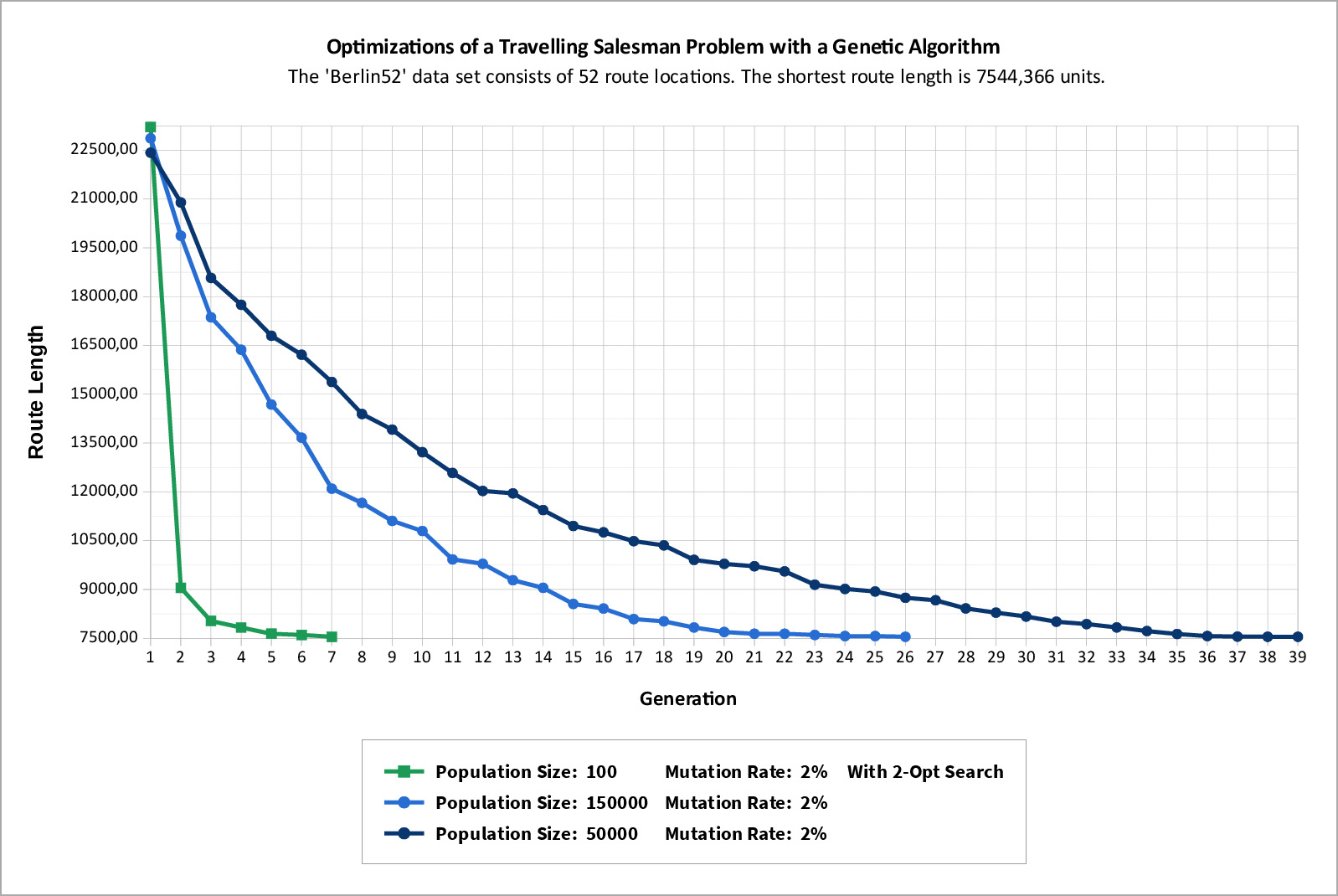 Figure 5 (click to enlarge)
Figure 5 shows the results of three optimizations of the 'Berlin52' Travelling Salesman Problem. The data set (created by Martin Grötschel) consists of 52 route locations. The shortest route length is 7544,366 units. In all shown cases the optimal solution was found after a few evolved generations. With a large population size of 150000 a sole Genetic Algorithm without 2-opt local search found the optimal solution in about 50% of the tests. A lower population size of 50000 needed more generations to find a short route and it got stuck in local optima very often. With a very large population size of 5000000 the algorithm found the global optimum solution most of the time, but the memory usage and computation time per generation increased dramatically. Huge improvements were gained by using a 2-opt local search after each mutation. With a very small population size of 100 the shortest route was found every time after only 3 - 10 generations.

A simple way to increase the chance of finding a global optimum solution is to run many search processes in parallel on different threads.

Figure 6 demonstrates another optimization of the 'Berlin52' Travelling Salesman Problem with a population size of 150000. It shows the genes of the best solutions per generation. The genes are indices for the different travelling locations in a route.

Figure 6 (click to enlarge)
Another example of an optimization process with a Genetic Algorithm is shown in Figure 7. A string (DNA) with 68 random characters (Genes) will be evolved until it matches a predefined string. Each character in the string can be picked from an alphabet of 54 different characters (upper and lower case letters, full stop and space). The fitness of the DNA is based on the number of correct characters in the string. This is a toy problem since the correct solution is already known but it is easy to implement and can be used to test the performance of the Genetic Algorithm. The number of possible combinations for this problem has 118 decimal digits! The algorithm found the optimal solution after 11 generations.

The following C++ implementation is based on the C++11 standard. It uses C++ features like smart pointers, lambdas and templates. The code focuses on easy readability and not on performance optimizations. The algorithm is not parallelized and performs no error checks. You will find more details in the comments of the source code. In the latest test the code compiled successfully with Visual Studio 2017 and GCC 5.3.

Please send your feedback to:

The code below is a solution for a Travelling Salesman Problem.
An alternative DNA class for a string search problem is also
included in the (source code) file which can be downloaded above.

File: genetic_algorithm.hpp
The code below is an implementation of a DNA class for a
Travelling Salesman Problem. An alternative DNA class for
a string search problem is also included in the (source code)
file which can be downloaded above.